Vodafone organized an encounter for the specialized press in the Gabriela Mistral Auditorium at Casa de América in Madrid to present its second study about state of digitalization of Spanish companies and public administrations, within the framework of the Observatorio Vodafone de las Empresas. For the stating it was decided to conceptualize and scenario formed by a large curved screen 23 meters wide by three high offering a resolution of almost 5k.

The system of wedges with which the LED modules are assembled allows to create concave or convex shapes, according to the anchoring angle, achieving spectacular stage composition and, above all, easy assembly.

On this occasion, the concave curvature of the screen offered maximum visibility to the attendees from all positions, turning the space into an immersive stage with an oblique base The content management on the screen was carried out with Barco E2 system and EC200 controller.

The light control of the room was made with Chamsys MQ500 lightning console, which was responsible for managing the stage hot spots, the theatre spotlights as well as the four LED spot moving heads LUMA 1500, a pair of Lumipar 18Q UO65 leds and rest of 15 pair LED wifi Smartbar.

Sono was also in charge of carrying out the recording and broadcasting of the event that could be followed in streaming through the social networks of Vodafone (Youtube, Facebook Live and Periscope).

The report of the Vodafone Observatory revealed the growing interest on the part of Spanish companies to incorporate systems based on the latest digital technologies (cloud, Internet of Things and Big Data).

However, despite the increased awareness of the need to incorporate the digital transformation, Spanish companies, according to the study, continue to prioritize investments in security and connectivity. This second report maintains the Public Administrations as the most aware of the digitalization. 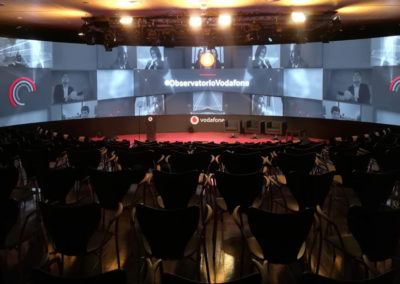