IESE Business School once again relied on Sono Audiovisual Technology to carry out one of its most important annual events, the Global Alumni Reunion. About 1200 attendees, among former students and guests, for a forum held at Palau de Congressos in Barcelona and where the voices of speakers such as Tal Ben-Shahar, author and lecturer on leadership and happiness, David Carmona, General Microsoft AI Manager or Kathleen Mc-Ginn, a professor at Harvard Business School, among others.

SONO Tecnología Audiovisual was the audiovisual partner for this event giving not only audiovisual coverage in the Palacio de Congressos but also providing the audiovisual technical resources for the gala dinner after which around 550 people attended in the spectacular hall Marqués de Comillas at Museu Marítim de Barcelona.

The scenographic design was composed of a central screen of 8.3 x 3 meters with oval corners and on which the main contents were projecte: videos and keynotes.

The composition was completed by two circular screens located on each side of three meters in diameter that were used both for projection of the logo and other IESE brand elements and to center the image of each speaker in each intervention.

In total three Christie laser projectors of 25k lumens each were used. The challenge was to achieve the perfect synchronization of the projected contents on the three screens.

SONO participated both in the tecnical design of the event, as well as in the installation and adjustment of the audiovisual equipment and live event management and also supporting the general lighting of space and sound.

For the visualization of the contents, Barco E2 management system with Watchout, 4 computers for power point pass and keynotes was used.

Ambient lighting and maximum stage visibility at the gala dinner.

The Global Alumni Reunion put the finishing touch to the day with a gala dinner held in the Marqués de Comillas at Maritime Museum of Barcelona. A spectacular Gothic nave consisting of arches and more than fifteen columns.

The architectural composition could mean a challenge for the correct monitoring from all angles of the event. This challenge was solved thanks to the placement of two 2.8 mm LED screens of 4 × 2.5 meters plus 4 84 ”monitors. S3 content management system, four computers with Qlab were used for content launching and the event was held to a camera.

The architectural beauty of the space was enhanced by applying a warm ambient lighting by means of 40 smart bats and 12 focus led.

Perimeter sound system was also used with L’Acoustic Wide, Focus and model 112 speakers, as well as Shure UXLD wireless microphone, Yamaha TF1 digital mixer. The acoustic design through the distribution of the boxes became especially important because of the type of space.

In short, an event that competes the services offered by Sono Audiovisual Technology for IESE Business School including the operation and audiovisual support services managed in all its venues (Barcelona, Madrid, New York and Munich). 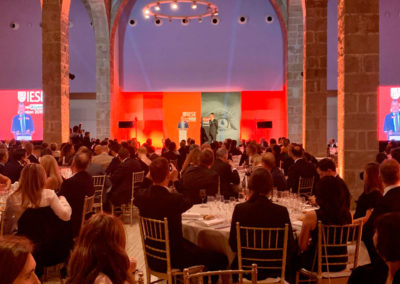 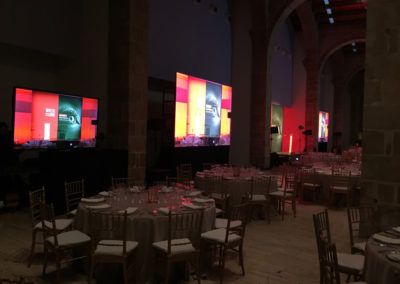 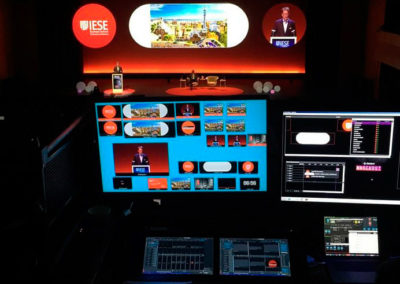