Sono Tecnología Audiovisual has been the specialist partner in providing audiovisual services and equipment for the ephemeral exhibition it can be already visited in the Castillo de Coracera in San Martín de Valdeiglesias, a village in Madrid.

The museization carried out in this fifteenth century enclave, built by Don Álvaro de Luna, valid for King Juan II, father of Henry IV, has consisted of equipping four exhibition spaces: one located in the Chapel and three more spaces in the Torre del Homenaje with projections and audiovisual content also produced by Sono.

The first thing that visitors can see, as soon as they enter the chapel, is two projections on the stone wall. Two audio- visual pieces, one of them with the figure of Álvaro de Luna, who explains to the visitors the history of the monument and another, with images of the castle accompanying the explanation.

The technical complexity of this assembly included the installation of a metal screen lacquered in white in the access to the adjoining space, as well as the placement of an opaque curtain, in the access from the outside, so that the entrance of light could be controlled, thus offering a visualization with hight quality.

Projection on vault in the weapons room The interior of the Torre del Homenaje is the next stop on the visitor’s route. As soon as you access the current conference room that occupies the space of the winery, you can see another video explaining the relationship between the town of San Martín de Valdeiglesias and Castillo de Coracera. Sono has been responsible for providing both the monitor service with speakers on stand-alone support, as well as the production of the video.

Continuing with the tour, we enter the homage room, the most beautiful and important one of the castle. In it, the visitor encounters two projections, one based on a mapping, with which the gaps and morphology of the castle are enhanced and another, used for visualization of planimetries (floors, elevations and sections), as well as representative drawings, playing with the lighting of the room.

It begins with a projection of 6×2.75 meters with images accompanied by explanatory audio and later the holes are analyzed by covering with the mapping projection.

The exhibition space located in the arms room has been arranged with explanatory audiovisuals on the successive restorations and modifications made in the original building. The peculiarity of the space includes audiovisual projec- tion of high luminosity over the barrel vault.

Autnomous operation of the system.

The different contents work with an automated system that allows a perfect synchronization of the contents, programming the waiting times between the release of each video, with countdown timers.

In addition, turning on and off the entire system is automated, using an intuitive Crestron keypad, also allowing the pause and resumption of audiovisual shows, volume control, without the need to use remote control, or move through the different spaces.

The adjustment of the blending projection for the vault was made taking care of the geometrical adjustment to the millimeter thanks to the Watchout system. 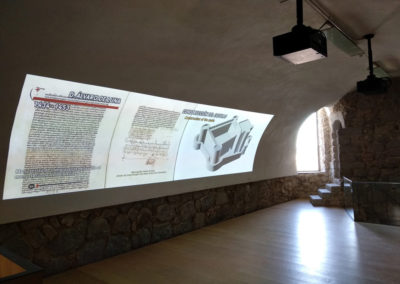 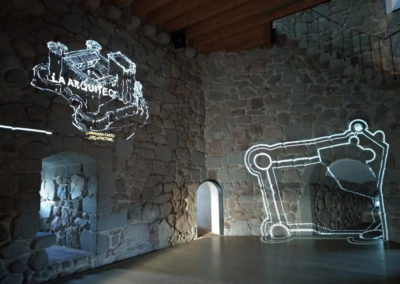 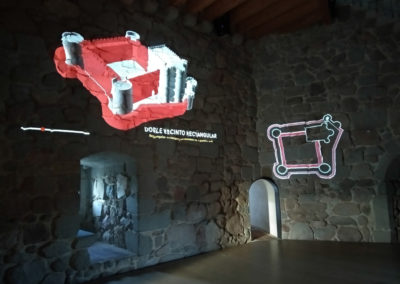 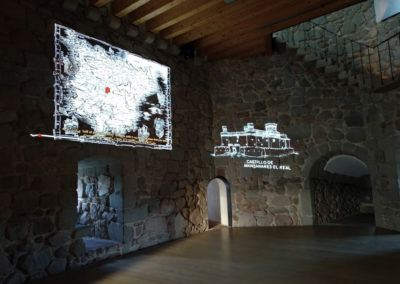