The automotive brand chose an innovative way full of audiovisual content and creativity to officially present its new Audi Etron model that has already begun its mass production at the Brussels factory.

The agency, Scacs, responsible for the design of the event, chose to set up a stage at ground level, consisting of a large 6 x 3 meter LED screen and 2,6 mm pixel pitch for viewing the contents. It also incorporated a touch table X Table (Digalix) through which the vehicle designer was making and drawing live, on Photoshop, the traces of the vehicle. Immersive effect for the public also in the creative process of the new vehicle.

The particularity of this event required an impeccable presentation as well as a surprise one. That’s why SONO provided kabuki fabric absorption system High Speed Reveal for the curtain coverage of the vehicle, so that the deployment at the time of discovery was fast, silent and spectacular, making the fabric disappear in a matter of seconds.

Another element of audiovisual techonology used for this event was a collaborative platform Rectable from which a musical session was held with an ad hoc composite soundtrack for the event. 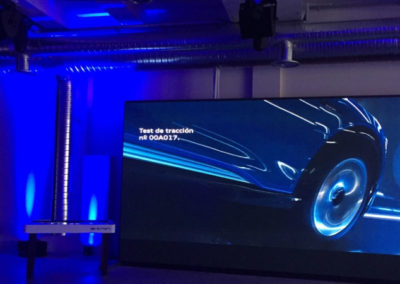